What Are The Different Positions in Baseball?

Home » Baseball » Baseball Guides » What Are The Different Positions in Baseball? 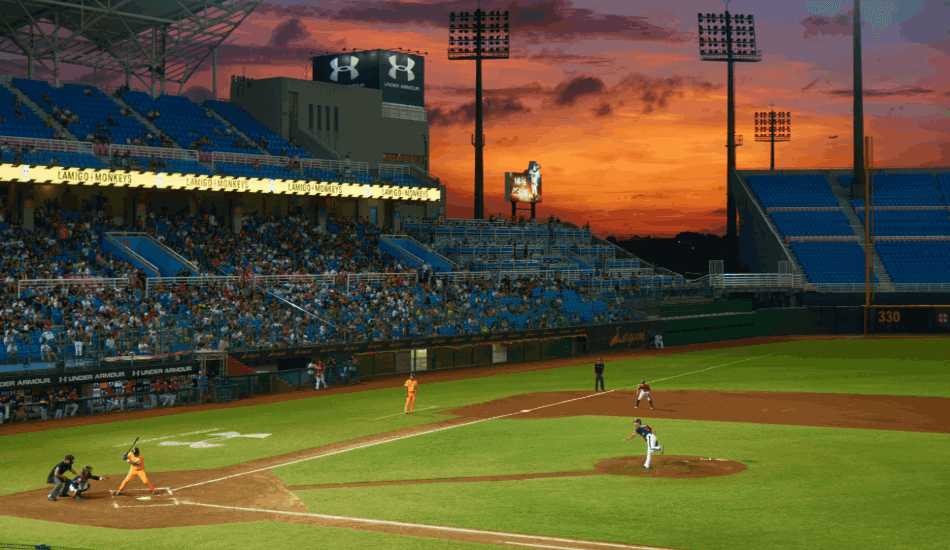 There are nine positions in baseball, each one with a unique role and importance. All baseball positions work in unison as a team in an attempt to defeat the opponent. They need to have fantastic hand-eye coordination, speed, reflexes and understanding.

Below you will find information on all the baseball positions 1-9 and how their roles are important in the game.

They can be divided into three categories:

Namely, the positions in baseball are:

Let’s take a look at what these nine players do, and why each one is so important to the game. 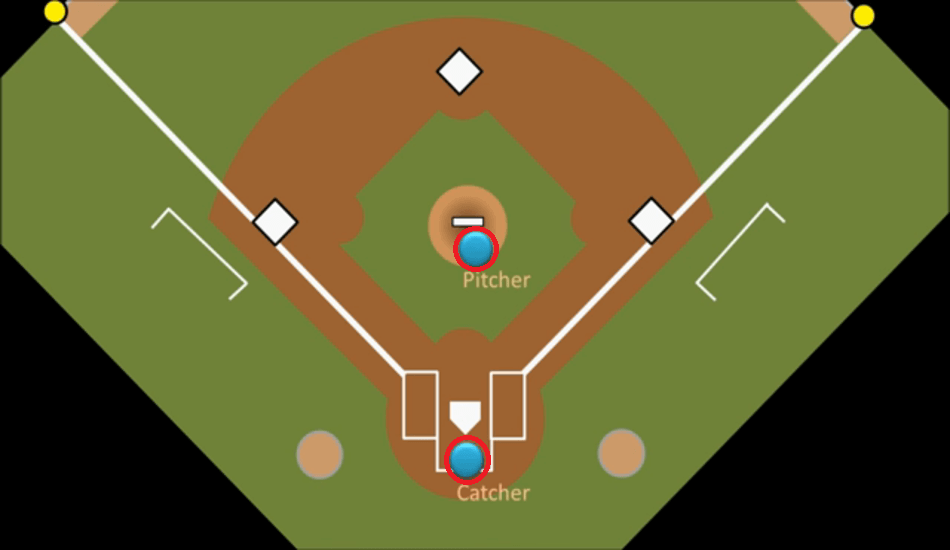 There are two pitchers, a starting pitcher and relief pitcher. It is the only one among the baseball positions to have a secondary player that can play in the second half of the game. Only one pitcher starts the game, placed at the pitching mound.

Pitcher’s job is to throw the ball that would miss the batter and enable the catcher to catch it. It is a very important position that requires speed, precision, and powerful throws. The main objective is to out the batters present in the pitch.

The relief pitcher comes in the second half of the game. If the starting pitcher proves to be ineffective, the second pitcher takes over the game. They are also responsible for throwing balls quickly towards other bases, in case a base runner is not at the base, to tag them out.

The catcher only has a singular job of catching the wall in hand when it comes to them. It is important to strike the batter out, and the catcher has to be good with precision and coordination of the body. A pitcher and catcher have to work together in an attempt to take the batter out.

It is one of the most dangerous positions in baseball. Thus, it requires proper protective gear because there is a risk of getting hit by the ball from the pitcher, or swing from the batter. The position also require work to tag out the baserunner that is reaching home. 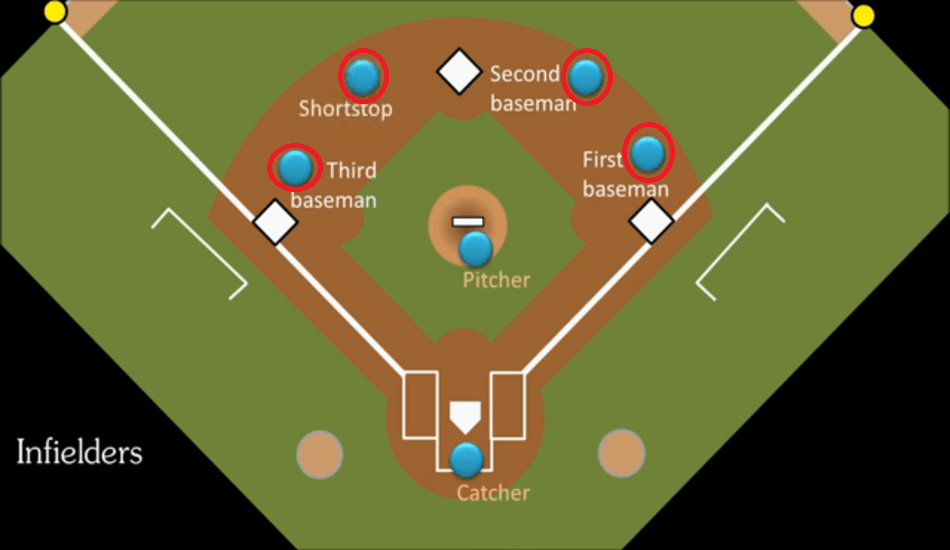 They need to have quick reflexes and reactions to work against the opponents. Shortstop is also one of the infield positions. Third basemen usually require a better throwing arm as they have to make the longest throws.

These positions usually stop groundballs and bunt balls. Most of the exciting game, at high speed, take place within the baselines.  Let us look at the individual base positions.

This is one of the most critical positions in baseball, easier if you’re a left-handed player.  A First Baseman is required to be bigger and stronger to catch the ball and possess fantastic hand-eye coordination to react in time. As it is closest to home base, they do not require a strong throwing arm.

However, First baseman falls among the primary baseball player positions, next to pitcher and catcher. They are the ones facing the shots, the most. It is vital to have a sturdy stance and work with the team.

This position requires precision and swiftness in the actions. It is a prominent position where they can tag the runners, track them, catch the ball to hit or throw it to others. The second base infielder is one of the most active positions in baseball on the field.

They need to be prompt and keep an eye out for everything on the field. However, they also have the support of shortstop and outfielders to ease up the load.

The third base infielder is required to field with bare hands. As it is farther, they also need to throw harder and have a stronger arm. It is also an easier position since there is a Shortstop available to do most of the important work.

With the help of Shortstop, they can pass the ball better. Their main job is to tag out any baserunner coming in their way, and that is all they usually have to worry about.

Speed is the primary trait of the shortstop as there is a vast field to cover. They move between second and third base fielding positions in baseball. It is an important position to stop the ground balls and also proves to be the most helpful to the third base.

Since the Shortstop does the work of closing the gap between third base and other bases, they also need to make sure to have immense stamina. It is the most important position near the third base and an assistant of the second base. 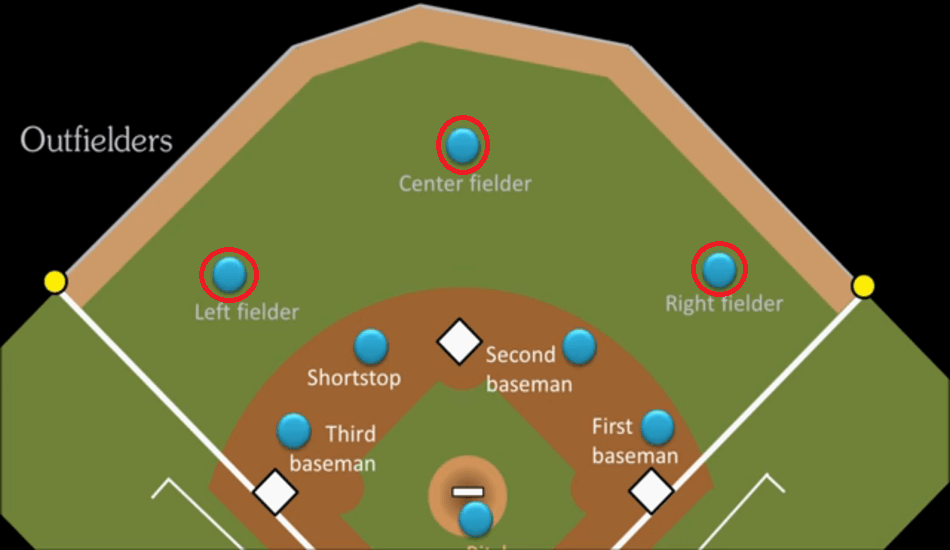 The baseball outfield positions are farthest from the base area and require a lot of endurance as a player. Stamina, speed and reflexes are all the traits an outfield must possess. They are mostly responsible for catching the flying balls, usually over their head.

They need to throw long distance accurately for precise gameplay. However, outfield does not receive as many ball hits as the infield.

Almost as important as the first base fielder, because this position is the backup. It is important for this fielder to predict and react according to the gameplay for precise movements. They are also the backup for any ball thrown from the left side of the field by shortstop or third base territories.

This position is similar to shortstop as they also have more ground to cover and usually catch the flying balls. It is essentially a backup of the second base but may require exceptional speed and throw combination to work the ground in their favor.

One of the easiest baseball defensive positions as the fielder is not required to have a strong throwing arm. They are required to have all the skillset of a good fielder like catching and throwing. It is a backup position to the third base.

Can a pitcher play another position?

The pitcher usually plays on the same position. All-rounder pitcher may be allowed to change the position in the days off. There is a relief pitcher if starter pitcher fails to deliver results.

What is the most dangerous position in baseball?

The catcher is the most dangerous position in baseball as the person is required to catch the ball coming at high speed for around 120 times. They have to be the most well-protected, as they also have the risk of a batter striking them by mistake.

What is the easiest position to play in baseball?

Infield position, apart from the first base, tends to be easiest positions of baseball for right-handed players. Whereas, left side fielding position is generally easier for the players.

Why is left field the worst position?

Statistically, Left-field gets the most hits due to the lack of prowess in the fielders. However, it also has the easiest play and farthest from the home base. Hence, it is considered one of the worst positions.

What is baseball defensive positions?