How Many Players are there on a Baseball Team?

Home » Baseball » Baseball Guides » How Many Players are there on a Baseball Team? 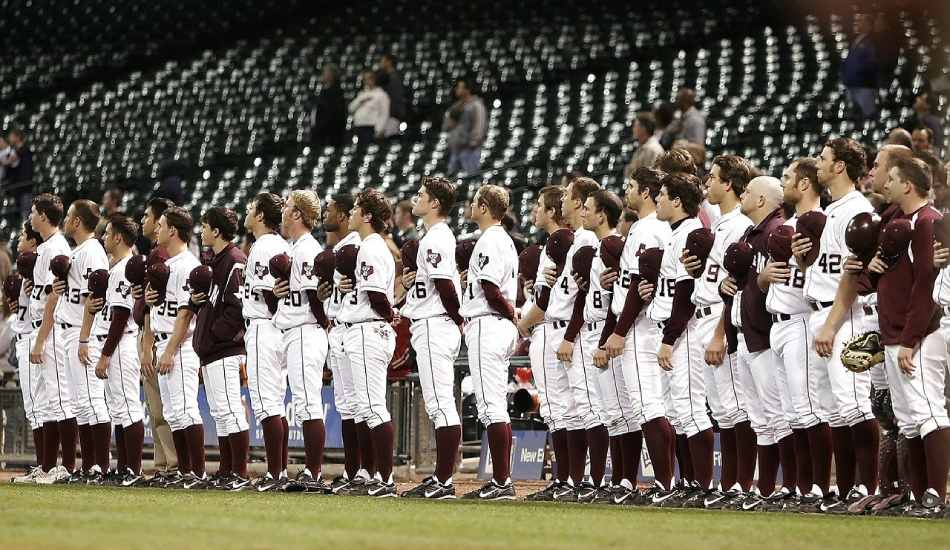 Baseball is one of the most popular sports in North America. It is both an individual and a team sport. As much as it comprises of a batter and a pitcher, it also involves other players who occupy the field. Due to this reason, oftentimes people find it hard to figure out how many players on a baseball team actually play together in a game.

If you have been looking for an answer to this question, then you have come to the right place. Apart from answering the question, this post will also shed light on some other interesting facts concerning this popular North American sport.

How many baseball players are on a team in an official game?

A baseball game takes place between two sides involving nine players each. Other than pitching and fielding, they also take part in batting and baserunning by taking their turns in a game.

Together, these turns add up to constitute an inning for each team in a game. In other words, the latter concludes its inning when it completes both the turns.

The rules of a baseball game may differ between the professional leagues and the ones involving high school players.

If you are more interested in the official rules of the game, you can find out more information about it on the website of MLB.

In North America, college-aged players go by the published rules of the National Collegiate Athletic Association (NCAA). Baseball games involving such players comply with the stated rules of the association, including the rule that governs the number of players who can play together on a team in a baseball game.

While strategies may differ from team to team, the official rules of MLB do not permit a defensive side to make changes to the actual number of players who can represent it. At best, it can make changes to the fielding position of the seven players, except for the pitcher and the catcher, depending on the situation of a game.

A baseball game involves nine distinct positions. Going by the conventional approach of the game, nine players, who play the game, fulfill the following positions:

The beauty of baseball lies in the fact that the sport allows a team to field a player in all these aforementioned positions when an offensive team continues batting in its inning to compile a score on the scoreboard.

It explains why baseball is an individual as well as a team sport. While it allows individuals to showcase their talent, on one hand, their collective performance is important for the overall success of a team in a match.

Thus, players not only play on the field for their individual performance to advance their careers but also to contribute to the victory of their team.

So far as the objective of the game is concerned, each of the two team aims to score more than its opposition as the outcome of a baseball game depends on it. In the end, the team with more runs wins a game.

What happens when a team runs out of its players?

If you are a baseball fan with an avid interest in the sport, you might be interested to know the answer to this question.

Given that the official rules on the MLB website state that each baseball game must have at least nine players, does running short of players affect the continuity of the game in any way? Moreover, how does it affect the fate of a team in the game?

Before you get an answer to these questions, you need to think about the composition of a team. While it is true that a team cannot have more than nine players in an official game, they can have backups in the hour of need.

Before the start of a game, the coach and managers of a team sit together and plan the number of players they would have for this purpose. The availability of backups is important from the standpoint of getting substitutes whenever there is a need for it in the course of the game.

So far, none of the teams have ever encountered a situation in which it has run out of all the backups.

But baseball, being a sport, resembles the characteristics of some of the other sports when it comes to an exception. Therefore, you cannot rule out the possibility of a rare situation in which a team may run out of its players. What happens if a team uses up all its backups and is left with eight players in a game?

Rule 7.03(b) of the MLB official rules gives the detail of the ensuing situation. It says, “A game shall be forfeited to the opposing team when a team is unable or refuses to place nine players on the field”.

Thus, in layman’s terms, a team’s inability to produce nine players on the field at any point in time in the course of a baseball game means that it would end up conceding the game to the opposition.

Despite the possibility of variations in the rule of the sport from one league to the other, the number of players in a baseball team remains the same in all games. Besides the official rules, the fielding positions of the baseball also necessitate the inclusion of nine players.

A team cannot make changes to this setup of the game but it can replace a player on the field with a backup or substitute depending on its requirement.

The head coach and the management officials of a team have the discretion over making the final decision on the number of substitutes for a game.

Generally, they ensure the presence of enough number of players for a replacement to avoid the possibility of running short of nine players as it puts a team at the risk of losing a game.